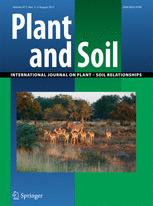 The forage grass Brachiaria humidicola (Bh) has been shown to reduce soil microbial nitrification. However, it is not known if biological nitrification inhibition (BNI) also has an effect on nitrogen (N) cycling during cultivation of subsequent crops. Therefore, the objective of this study was to investigate the residual BNI effect of a converted long-term Bh pasture on subsequent maize (Zea mays L.) cropping, where a long-term maize monocrop field (M) served as control.

A significant maize yield increase after Bh was evident in the first year compared to the M treatment. The second cropping season showed an eased residual effect of the Bh pasture. Soil incubation studies suggested that nitrification was significantly lower in Bh soil but this BNI declined one year after pasture conversion. Plant N uptake was markedly greater under previous Bh compared with M. The N balance of the 15N micro-plots revealed that N was derived mainly (68– 86%) from the mineralized soil organic N pool in Bh while plant fertilizer N recovery (18–24%) was not enhanced.