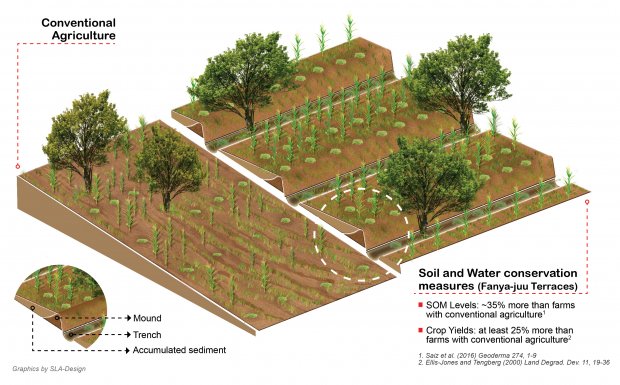 Land degradation has spread to two-thirds of sub-Saharan Africa due, in part to the increased pressure of agriculture to meet the food needs of a growing population and variabilities caused by climate change. But smallholder farmers are fighting to reclaim and revitalize the land, and their efforts in soil and water conservation may be helping more than anyone knew.

An international group of researchers led by the Karlsruhe Institute of Technology (KIT-Germany) found that the long-term impact of Fanya-juu terraces, a soil and water conservation measure employed in degraded agricultural landscapes, is so effective in both preserving valuable topsoil and promoting plant growth that it has led to the recovery of organic matter levels comparable to those observed in neighbouring semi-natural ecosystems. Farms with such terraces store one-third more soil organic matter than farms under conventional agricultural practices.

Fanya-juu terraces have increased crop yields by at least 25% in East Africa, contributing to their increasing use. Fanya-juu means “throw it upwards” in Kiswahili, referring to how these structures are constructed. Farmers dig trenches in fields along contour lines, using the soil to form parallel embankments (mounds) on the up-slope side of each trench Terrace beds develop gradually behind the mounds as soil naturally moves down from the upper part of the terrace, preserving more water and nutrient-rich topsoil than conventional agriculture.