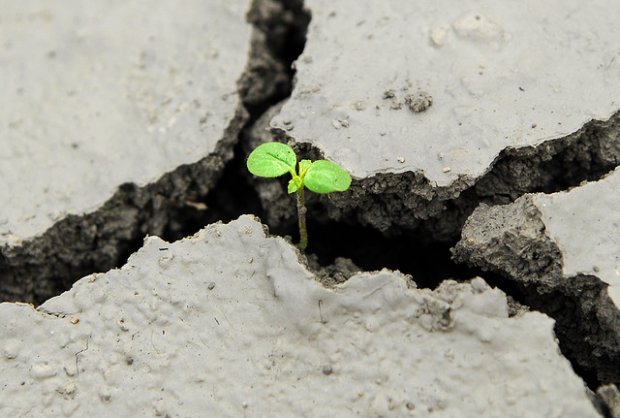 Put enough carbon into the soil, and climate change problem solved. Right? Not according to a new paper that estimates global climate change mitigation potential of soil organic carbon sequestration on agricultural land.

It is commonly assumed that the introduction of soil carbon sequestration measures on agricultural land, such as conservation agriculture, will continue to fix carbon at a constant rate for some decades into the future. The reality is likely to be different.

A global effort to sequester carbon would lead to a steady rise in annual soil organic carbon sequestration, but soil in any particular location can’t soak up infinite amounts of carbon. Thus, after two or three decades, as less and less land becomes available to become carbon sinks and lands already under sequestration reach their limits, the global amount of carbon that are sequestered or ‘soaked up’ would peak and then slowly drop to zero. That’s not to say that soils don’t have a role to play in climate change mitigation.

Sommer estimates that soil could store up to 9 percent of total emissions in the firs few decades of concerted effort to sequester carbon in soil.

The earth would reach a new, higher, organic carbon equilibrium, but would still be limited in how much more carbon could continue to be sequestered.

The higher amount of organic carbon in soils would also lead to increased soil fertility and so higher agricultural productivity – another challenge for agriculture in the twentieth century.

There is no single silver bullet to stop climate change. Effective climate change mitigation will be the sum of many initiatives, including climate-smart agriculture and other low-emissions development initiatives such as soil organic carbon sequestration.

This work was undertaken with the Low-Emissions Agriculture flagship of the CGIAR Research Program on Climate Change, Agriculture and Food Security (CCAFS), which is a strategic partnership of CGIAR and Future Earth. This research was carried out with funding by the European Union (EU) and with technical support from the International Fund for Agricultural Development (IFAD). The views expressed in the document cannot be taken to reflect the official opinions of CGIAR, Future Earth, or donors.