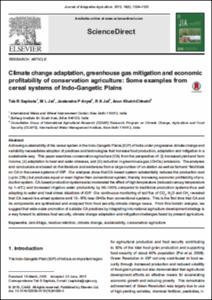 Achieving sustainability of the cereal system in the Indo-Gangetic Plains (IGP) of India under progressive climate change and variability necessitates adoption of practices and technologies that increase food production, adaptation and mitigation in a sustainable way. This paper examines conservation agriculture (CA) from the perspective of: (i) increased yield and farm income, (ii) adaptation to heat and water stresses, and (iii) reduction in greenhouse gas (GHGs) emissions. The analyses and conclusions are based on the literature and evidences from a large number of on-station as well as farmers’ field trials on CA in the cereal systems of IGP. Our analyses show that CA-based system substantially reduces the production cost (up to 23%) but produces equal or even higher than conventional system; thereby increasing economic profitability of production system. CA-based production systems also moderated the effect of high temperature (reduced canopy temperature by 1–4°C) and increased irrigation water productivity by 66–100% compared to traditional production systems thus well adapting to water and heat stress situations of IGP. Our continuous monitoring of soil flux of CO2, N2O and CH4 revealed that CA-based rice-wheat systems emit 10–15% less GHGs than conventional systems. This is the first time that CA and its components are synthesized and analyzed from food security-climate change nexus. From this holistic analysis, we suggest that wide-scale promotion of suitable CA practices by integrating into national agriculture development strategy is a way forward to address food security, climate change adaptation and mitigation challenges faced by present agriculture.
Print this page
Publications and Media
back to top
SAMPLES