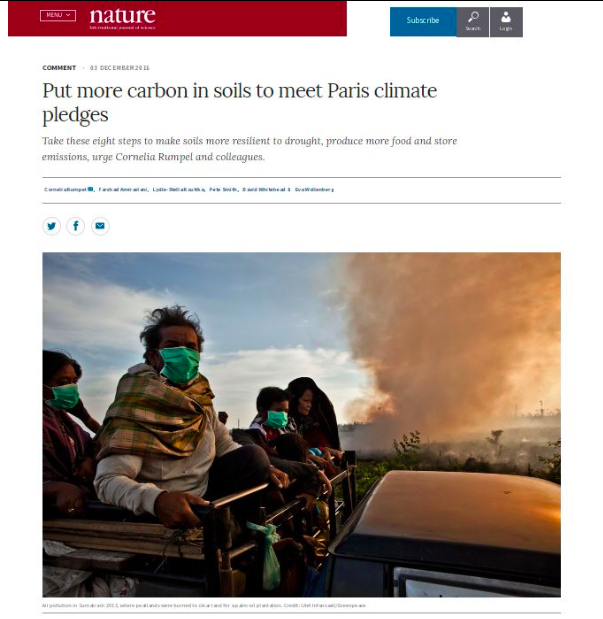 Soils are crucial to managing climate change. They contain two to three times more carbon than the atmosphere. Plants circulate carbon dioxide from the air to soils, and consume about one-third of the CO2 that humans produce. Of that, about 10–15% ends up in the earth. Carbon is also essential for soil fertility and agriculture. Decomposing plants, bacteria, fungi and soil fauna, such as earthworms, release organic matter and nutrients for plant growth, including nitrogen and phosphorus. This gives structure to soil, making it resilient to erosion and able to hold water. Typically, organic matter accounts for a few per cent of the mass of soil near the surface. Increasing the carbon content of the world’s soils by just a few parts per thousand (0.4%) each year would remove an amount of CO2 from the atmosphere equivalent to the fossil-fuel emissions of the European Union1 (around 3–4 gigatonnes (Gt)). It would also boost soil health: in studies across Africa, Asia and Latin America, increasing soil carbon by 0.4% each year enhanced crop yields by 1.3% (ref. 2). Yet one-third of the world’s soils are degraded3. Poor farming practices, industry and urbanization take their toll. Throughout human history, 133 Gt of carbon have been lost from soils, adding almost 500 Gt of CO2 to the atmosphere4. As the amount of organic matter dwindles, soils face mounting damage from erosion, heatwaves and droughts — it is a vicious circle. In the worst cases, nothing can be grown. This is what happened in the 1930s ‘dust bowl’ in the central southern United States. Improving soil carbon is now high on the political agenda. In 2015 at the Paris climate summit, France launched the 4p1000 initiative — to promote research and actions globally to increase soil carbon stocks by 4 parts per 1,000 per year. We are members of the scientific and technical committee for this initiative. In November 2017 at the Bonn climate conference in Germany, delegates established the Koronivia Joint Work on Agriculture programme. Tasked with helping farmers to reduce emissions and maintain food security in a changing climate, it will hold its first workshop this week at the annual summit of the United Nations Framework Convention on Climate Change (UNFCCC) in Katowice, Poland. We call on countries involved in the Koronivia process to establish a body to monitor soil carbon in farmland, map changes to it and reclaim degraded areas. All involved should focus on the eight steps set out below.