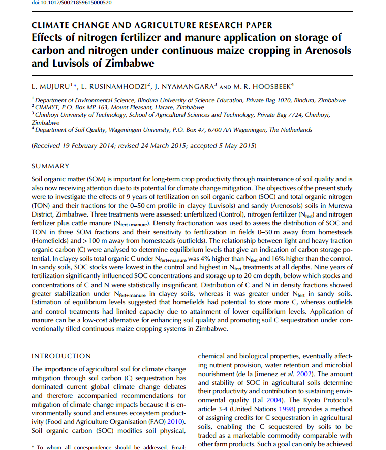 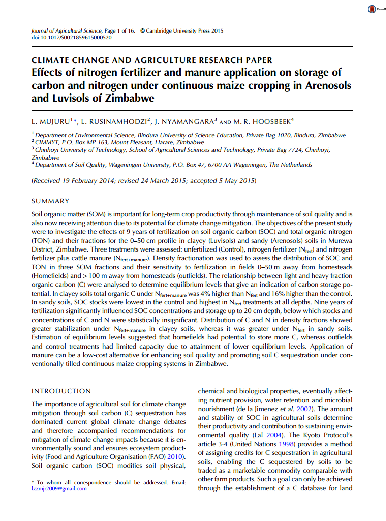 Soil organic matter (SOM) is important for long-term crop productivity through maintenance of soil quality and is also now receiving attention due to its potential for climate change mitigation. The objectives of the present study were to investigate the effects of 9 years of fertilization on soil organic carbon (SOC) and total organic nitrogen (TON) and their fractions for the 0–50 cm profile in clayey (Luvisols) and sandy (Arenosols) soils in Murewa District, Zimbabwe. Three treatments were assessed: unfertilized (Control), nitrogen fertilizer (Nfert) and nitrogen fertilizer plus cattle manure (Nfert+manure). Density fractionation was used to assess the distribution of SOC and TON in three SOM fractions and their sensitivity to fertilization in fields 0–50 m away from homesteads (Homefields) and > 100 m away from homesteads (outfields). The relationship between light and heavy fraction organic carbon (C) were analysed to determine equilibrium levels that give an indication of carbon storage potential. In clayey soils total organic C under Nfert+manure was 4% higher than Nfert and 16% higher than the control. In sandy soils, SOC stocks were lowest in the control and highest in Nfert treatments at all depths. Nine years of fertilization significantly influenced SOC concentrations and storage up to 20 cm depth, below which stocks and concentrations of C and N were statistically insignificant. Distribution of C and N in density fractions showed greater stabilization under Nfert+manure in clayey soils, whereas it was greater under Nfert in sandy soils. Estimation of equilibrium levels suggested that homefields had potential to store more C, whereas outfields and control treatments had limited capacity due to attainment of lower equilibrium levels. Application of manure can be a low-cost alternative for enhancing soil quality and promoting soil C sequestration under conventionally tilled continuous maize cropping systems in Zimbabwe.